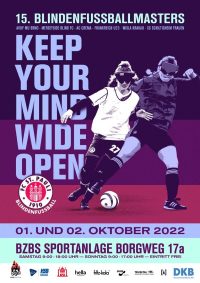 The Hamburg 2022 tournament, which took place from 1 to 2 October 2022, lived up to its promise with some great matches ! The home team FC St Pauli lost their title to the valiant team of Merseyside BFC.

In the match for the third place, the Italians of AC Crema finally got the better of the tenacious Czechs of Avoy Mu Brno after a penalty shootout !

As for the French U23 team, they unfortunately could not qualify for the semi-finals by finishing 5th of the preliminary phase. Our young players had to play the match for the 5th place of the final ranking against the Polish Wilsa Krakow. The victory was acquired in the penalty shoot-out : 2 goals to 1.

If we look at the stats of the competition, only one defeat conceded against the future winner of the tournament, four draws and one victory in the penalty shoot-out. If we have to retain only one conclusion : NO goal was scored in the match by the French U23 team. On the other hand, only one goal was conceded !

The U23 french coach confirmed these impressions at the end of the tournament :

We note a progress of the collective on the mental and defensive level. But we still have a lot of work to do, especially in terms of technique and offense. A nice learning tournament for our youngsters !