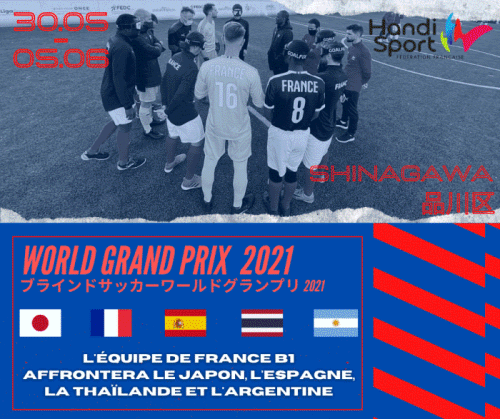 New step in the preparation for the Paralympic Games : France will participate in the World Grand Prix which will also take place in Tokyo from May 30th to June 5th 2021. This is the first official tournament of the IBSA (“International Blind Sport Association”) for almost 18 months !
The French B1 team will be present at this major event in Japan, which will be a rehearsal for the Paralympic Games.

Some of the world’s best blind football teams will be in Tokyo at the end of May 2021. The French will have the opportunity to compete against Japan, Argentina (winner of the previous edition of the World Grand Prix), Thailand and finally Spain. Very nice matches in prospect which will be broadcasted live on the official website of the event.

What will France’s strategy be ?

After a series of games against Spain in April, national coach, Toussaint Akpweh, had the opportunity to test different tactical configurations. Some were successful (including a 4-0 win) while others were less successful.

So the question of the moment seems legitimate : will he, this time, continue to carry out configuration tests or is his goal to win the tournament ?

The situation of the coach is quite delicate. For the players, the staff and all the fans, a victory in a tournament of this importance would be crucial for morale. It would help build confidence before the Games.
On the other hand, the priority objective being the Paralympic medal : isn’t it too early to unveil our strategies ? If our opponents can observe carefully (and they will !) our way of playing, they will have plenty of time to adapt and think of ways to better counter us.

The strategy is going to be complex : to show our strengths to everyone to impress our opponents or not to reveal too much and create the surprise?

The French B1 team will take off for Tokyo on May 26 with a first match scheduled for May 30, 2021, on the first day of the tournament, against our hosts, Japan.

The opening match is expected to be Thailand versus Spain followed by Japan versus France.

The complete program as well as the selected French players will be communicated very soon on our site.

This event will be without spectators and will respect strict sanitary measures: regular tests of all participants and supervisors, restricted traffic zones and maximum limitation of contacts.

As mentioned above, all the matches will be broadcasted live on the tournament website. There is a time difference of + 7 hours between Paris and Tokyo.

Our website and all our networks Cécifoot France will develop a special coverage so that you can follow this event from France and in French. Dedicated pages will be created to relay the scores, the program, the rankings, the French scorers and of course the links to follow the matches live.