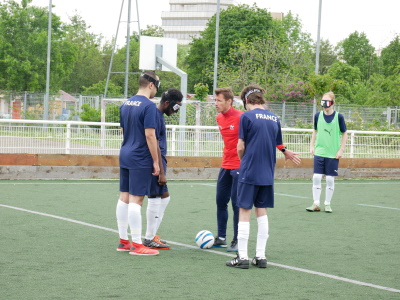 The French U23 national blind football team was in Schiltigheim from May 14 to 16, 2021 for a training camp. Throughout the weekend, the team appeared to be very close-knit, united towards a common goal of progress.

The themes of this training course were the offensive game and the taking of initiatives in match. Capital points in the preparation of their future international tournament of reference at the beginning of October.

Course of this training camp

With one training session on Friday, three on Saturday and one on Sunday morning, the pace was fast. The goal was to analyze the reaction of the players to fatigue : a very common notion in blind football when you have to play several games in the same day.

A session with the U23 always follows the same pattern : presentation of the day’s objectives, 1min30 of silent concentration to better immerse oneself in the session to come, then a scouting of the field. Then come the global warm-ups and the more specific ones with ball.

Always with the aim of developing the offensive qualities of the players, mini-matches with a theme were concocted by the technical staff. For example, the Bleus Espoirs had to compete in teams of three with the following instruction : if a goal was scored, it was only counted if the whole team had crossed the halfway line. The objective was to stimulate the game forward.

In order to one day reach the highest level, the work is not limited to the blind football field. Many external elements can support the search for performance. This is why the coach of the French U23 team, Rémi Garranger, chose to have his group participate in a theater workshop. Indeed, the notions of creativity, imagination and team cohesion are concepts that can be very useful in a match !

And about the goal keepers ?

While the players were developing their offensive abilities, the goalkeepers were training under the supervision of their specific coach, Benoit Chevreau, goalkeeper of the French senior team. Physical work, development of reflexes and athletic capacities, no respite was given to them.

To conclude, this training camp has shown that our U23 players are full of desire and only want to take up new challenges. The collective is very complicit and evolves together in harmony. Of course, there is still work to do but we can’t help but think that they are on the right track ! We can’t wait for the next games and the realization of the efforts of this beautiful team !