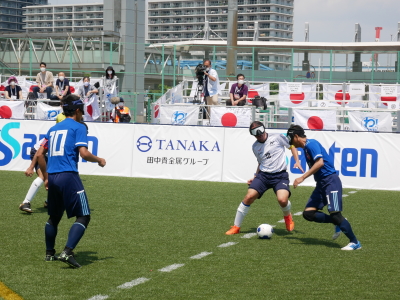 Three days of competition have just ended in Tokyo in this 2021 edition of the World Grand Prix. Tomorrow, no match, all the teams have a rest day : the opportunity to take stock !

The French B1 team did not play this Tuesday, June 1, 2021 while two games were scheduled. In the morning, Argentina won 4 goals to 3 against Thailand after a game full of twists and turns ! Indeed, the Thai team first conceded a goal before scoring two goals in quick succession, making the solid Argentina team doubtful at the end of the first half. When they returned to the field, the South Americans took control of the game and managed to impose their game : 4 goals to 2 in the 16th minute. At the very end of the game, Thailand managed to reduce the score and scored a goal from the penalty spot with one second left ! Incredible game which offers however three points to Argentina and 2 victories in 2 games. Final score : 4-3 for Argentina.

At the beginning of the afternoon, Spain faced the local team, Japan. This match was highly anticipated. The host team is indeed the team in form of the moment with two victories in the first two days. Spain, on the other hand, had a difficult start with a 3-2 defeat against Thailand. It was absolutely necessary to win to remain in good position for the title. At the beginning of the match, the game is balanced, opportunities on both sides but the first half ends on a blank score 0-0. In the second half, on a very nice move of the goalkeeper at the 9th minute, the Japanese number 11 dribbles the defense and scores ! Japan confirms that it will be necessary to count on them in this tournament. However, Spain will not admit defeat and will hold on until the end by scoring 1 goal at the 18th minute.

Ranking after the third day of the tournament

Check the updated tournament ranking at any time!

As a confirmation, Japan is still leading the ranking three days after the beginning of the tournament : 7 points and a goal difference of +2. The local surprised the other teams by their offensive qualities.
However, it is a fragile position because they are closely followed by Argentina (6 points) who has still one game to play. For sure, their direct confrontation on Thursday, June 3 is very expected ! However, except major reversal unlikely, Japan is very close from the final of its tournament.

As for the other teams, nothing is played yet ! Thailand can still disturb the leading duo with a last game to play against the French team. “Les Bleus” are condemned to success if they want to qualify for the third place match. The final of the tournament seems, as for it, already inaccessible.
For Spain, everything is still possible, they still have two games to play.

Finally, at the end of this third day of exciting matches, only Japan can dream of the final, followed by Argentina. For the other teams, everything remains to be done !

Schedule of the next days

Before moving on to the final phase of the tournament, there are still two days to be played, four games that promise to be exciting.

Spain will face France at 10:30 am Japanese time (3:30 am French time) for the European duel of this tournament !
To be followed at 1pm (6am French time), the highly anticipated Japan-Argentina match !

France will face Thailand at 10:30 am Japanese time ; a match full of stakes for Thailand which will certainly be a formidable opponent ! “Les Bleus” will have to be vigilant.
To conclude this day, Spain will challenge Argentina !

The teams will rest in Tokyo this Wednesday, June 2, 2021 to offer us beautiful games, stay tuned on our networks for more information !