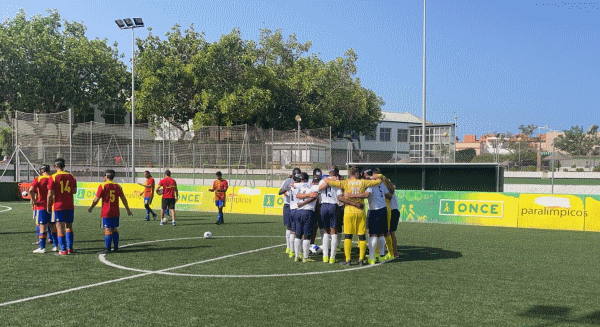 This Saturday, July 24, 2021, the french national team was present in Cadiz (Spain) to play two friendly games against the Spanish selection. This was the last trip of the French team before the Paralympic Games in Tokyo.

During these last moments in real opposition, the national coach, Toussaint Akpweh, was able to make his final observations/tactical tests before making his final decision : the official selection of the players who will go to the Paralympic Games in Tokyo. The list should be communicated very soon.

The first game : one goal and a good management

The starting team consisted of the following players :

From the first half, the French team takes control of the game and breaks away from the score with a goal from Frederic VILLEROUX.

In the second half, the coach will choose to turn his squad by bringing in Yvan WOUANDJI instead of Tidiane Diakhité and Benoit CHEVREAU instead of Alessandro Bartolomucci.
The game remains under control and the team keeps its lead in the score. A few fouls to report that will give the opportunity to the Spanish to get a double-penalty with one minute to go. Fortunately : not converted. Final score : 1-0 for France.

The second game : configuration tests, a nice come-back but a narrow defeat

The starting team consisted of the following players :

The Spanish, certainly angry about the morning game, are very offensive and very conquering. At the end of the first half, the locals lead by 2 goals to 0.

In the second half, the French team makes some changes that will allow them to come back to the score 2-2. Goal of Tidiane DIAKITE and Babacar NIANG on a double penalty. The Spanish are more feverish in the second half with six fouls in the 8th minute.

However, after a nice comeback, “Les Bleus” slacken slightly and allow the locals to score a third goal. France obtains a second double-penalty but unfortunately it will not be converted. Final score : 3 goals to 2 for Spain.

In conclusion, these last moments of games before leaving for the ultimate competition have brought comfort to the French team in terms of its tactical choices. The base is solid, the replacement options are numerous and very interesting : a good news only one month before the Paralympic Games. A final meeting will take place in Lens in 15 days before flying to Japan !