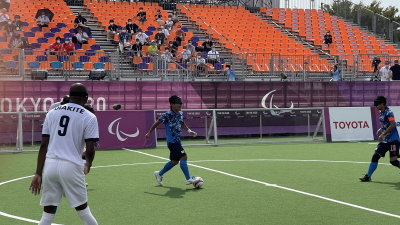 In Tokyo, the second day of competition of these Paralympic Games has just ended. There is only one match left to play in the preliminary phases. The semi-finals are already taking shape.

France eliminated from the main draw

The French team, responsible for a bad start against Japan in the first day, was able to show a new face against China in the second game. The French were much more involved and concentrated but it was not enough : China won 1-0 at the very end of the game. The regrets are to be directed on the side of the real counter-performance realized against the Japanese : defeat 4 to 0. Unfortunately, after two defeats, the French cannot play any more the medal and the final phases ; they will be condemned to play the matches of classification. We will know their future opponent tomorrow night.

Brazil already in the semi-finals !

After perfect games with victories each time quite large, Brazil is already assured of its place in the semi-finals. The Paralympic Games are really successful for them at each edition !

Japan or China in the semi-finals ?

It’s the big match tomorrow ! The winner will be qualified for the semi-finals of the Paralympic Games. Both teams have a chance in this match which seems quite open.

Final group match for the French : will they continue to pursue their efforts and succeed in increasing their level of play? To offer a real opposition to Brazil, the best blind football nation in the world, would be a nice reward after the failures of the last days. A good performance would allow France to hang on to the classification match for 5th place in the Paralympics. In case of defeat, the team will play the match for the 7th place.

Argentina in the semi-finals !

Like its South American neighbor, Argentina offered serious games and with its two victories over Morocco and Spain, is assured of moving to the next stage of the competition.

Morocco and Spain: the match for a place in the semi-finals !

As in Group A, there will be a big game tomorrow, Tuesday, August 31 ! Morocco created the surprise by winning 2 goals to 0 against Thailand. They are now equal on points with Spain. Their direct confrontation of tomorrow will determine which of the two nations will go to the semi-finals !

Thailand on the way down

Thailand is in the same situation as France in group A. They are condemned to the exploit this time against Argentina to try to rise a little higher in the Paralympic ranking and avoid the match of the last place.