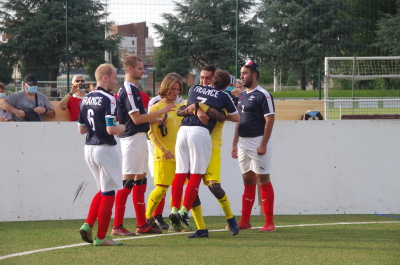 This Saturday, July 31 and Sunday, August 1, 2021, European blind football turned to the youth and therefore its future. The French U23 team had a meeting with its counterpart from the other side of the Rhine : the German U23 team (under 23).

The objectives of this meeting were multiple with in particular a will of the two countries to create a European and even world dynamics around the young U23 teams.

Moments of exchange and sharing between players and staff

Common trainings were realized with technical exercises animated successively by the French and German staffs. This was an opportunity to exchange on the different training methods and thus to perfect the training of our players. Learning through exchange and openness to others : what could be more beneficial for everyone ?

The two teams played each other in two games : one game on Saturday and one game on Sunday. Here are the results :

The game was complicated with a lack of defensive organization on the French side. The Germans, with several players already in the senior national team, were much more realistic.
Added to that, the young french players have cruelly lacked offensive actions in this game. It did not take more to our European neighbors to close the game on the final score of 2 goals to 0 to their advantage.

This second confrontation allowed to set up a better defensive organization on the side of the French. However, it is the physical aspect which was cruelly missing ! Our players were quickly tired, leaving the field free to the German attackers. The final score is severe : 7 goals to 1 for our neighbors !

Hocine SAHRAOUI : first goal scorer in the history of the French U23 team

During the second match, Hocine SAHRAOUI (n°2) scores a goal and finally opens the counter of the U23team, founded in 2019. This is indeed the very first goal in competition for this collective. A release ? The future will tell us. In the meantime, congratulations to Hocine !

In conclusion : hard work and a victory for blind football

Certainly, these two heavy defeats have allowed us to measure the road that remains to be traveled for the French U23 team in its path towards the High Level and Performance. But the desire and the involvement were present, favoring the questioning and the definition of new objectives. It was very hard physically for the young French : the staff is already preparing the future trainings.

The sport, blind football, emerged from this common weekend as a great success. Everyone had fun, was able to exchange and compare their points of view. What to sport other European nations and the organization of future days with U23 teams ? To be continued…

This week-end was made possible thanks to the support of the French-German youth Office. A big thank you to them.