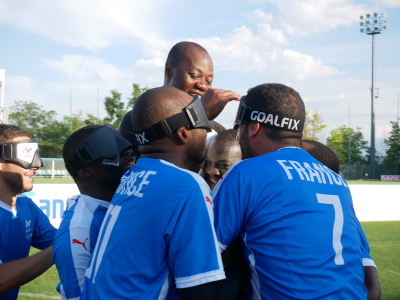 On June 15, 2022, the French B1 blind football team qualified for the European Championship final by beating Germany in a hard-fought match that was narrowly won on penalties.

The big final of this European championship took place on June 17, 2022 and opposed France to Turkey ; a team that the Blues had already faced in the group stages. A completely different game !

This extremely tense final saw periods of domination by both teams with clear chances. The Turkish team, carried by its extremely efficient number 17, often just missed to open the score. The Blues held on and had some good opportunities saved in extremis by an excellent keeper. At the end of the regular time, the score was still 0 to 0.

So it was time for the penalty shootout, under high tension ! For France, Benoît Chevreau keeps the goals. The first two shooters fail. Still 0-0. The situation is unblocked but still equal : 1 goal for each side.

The following Turkish player advances and misses his shot. The french captain, Babacar NIANG, absolutely need to score. He shoots and offers the victory 2 goals to 1 to the French team which becomes European champion !

A big congratulations to this French team which knew how to get up after the failure of the Paralympic Games of Tokyo 2020. The Blues are back on top of Europe and have qualified for the 2023 World Championships in Birmingham.

Find all the results and the final ranking of the tournament in this article.