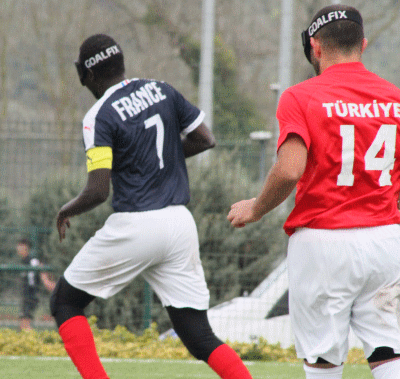 From April 5 to 7, 2022, the french blind football national team went to Turkey to play two friendly matches against the Turkish national team in the facilities of their national football Federation in Istanbul. This trip was part of the preparation for the European Blind Football Championship next June.

The French players and goalkeepers selected to go to Turkey can be found here.
To note, the absence of players usually on the field like Frederic VILLEROUX, Tidiane DIAKITE, Gaël RIVIERE or Martin BARON.

The thread of the games

In the first half, the French team was composed of :

The Turks quickly take the lead of the game by scoring a goal in the 8th minute and put a constant pressure on the French team. 1-0 for Turkey at half-time.

At the 7th minute, a foul is committed in the penalty area on Arona SOW. Babacar NIANG scores the first goal of the “Blues” on penalty. The local team will increase its pressure in attack and will exploit big defensive gaps in our camp. The French goalkeepers had to stop a consequent number of strikes which end up in 2 goals and a final score of 3 to 1 in favor of Turkey. In addition to the defensive problems on this game, the Blues had too few shots in the direction of the Turkish keeper to worry him or disturb their clear domination in the game.

In the first half, the French team was composed of :

The first period was in the continuity of the game of the day before with major defensive gaps. The locals will take advantage of it to score 2 goals. The score at half-time is 2 to 0.

In the second half, Benoit CHEVREAU keeps the French goals and Arona SOW comes to take the place of Mickaël MIGUEZ. We observe a clear improvement of the defensive and offensive performances of the French team. The Blues manage to compete with the Turks by offering themselves 2 very clear opportunities but finally not concretized. The final score will remain 2 to 0 for Turkey at the end of the game.

This trip to Turkey has highlighted the various problems of the French team even if some usual players were absent. The team will have to remobilize and quickly correct the situation before the next big competition : 2022 European Championship. The opportunities to work will not be far away : The “Blues” will meet again in Angers on April 25th to face Turkey again, but this time at home!